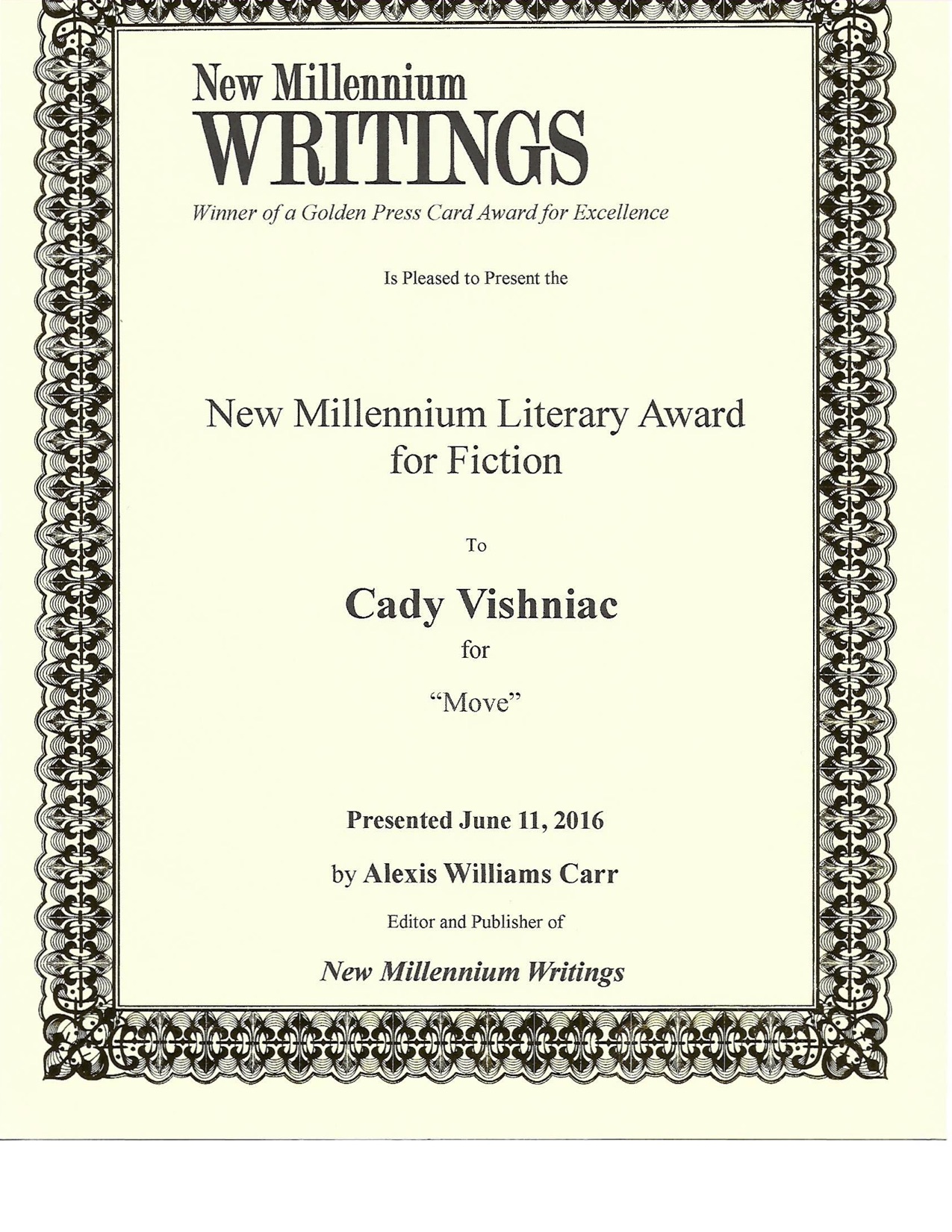 So I’ve won some contests. This started at the tail end of undergrad, and has continued into the present day. In the past year, I’ve won contests at New Letters, Mid-American Review, and New Millennium Writings. I placed second at Wag’s Revue immediately before that magazine shut down forever, and placed third in Glimmer Train, which was a pretty sweet get. I’ve been a finalist often enough that I no longer remember how many times that’s happened and where. I am currently, so far as I can tell, in second readings rounds at a couple places, and will probably, G-d willing, win some more contests in the future.

But I actually have some mixed feelings about contests, and this is as good a place as any to discuss those feelings.

First off, what kind of work wins contests? Highly polished work, sure, and good work, yes, but I think there’s more to it than that. This summer I attended the Kenyon Review Writers Workshop. We ended up discussing contests during one workshop, and our instructor, in her infinite wisdom, pointed out that contests are tricky, that when you read a thousand pieces at a clip, you end up looking for the surprising sentence over the merely competent one. That despite the best efforts of readers, contests, by their very nature, run the risk of rewarding work disproportionately for its ability to stand out.

I think my Kenyon instructor is right. My ego is not too huge to acknowledge the following: it’s easier for me to make my stories shocking than it is for me to make them artful.

And yet, however much it might benefit me, I am sometimes less than thrilled with this idea. There are some excellent stories that are not as startling, maybe quieter and more domestic, and I want them to get the recognition they deserve. As a woman, I’m painfully aware that many of these quieter domestic stories are written by other women. As a mother, I think we all ought to using writing to puzzle out the struggle in which most American families are engaged, consciously or not—how do we teach our children to be decent people when societal values consist mostly of mindless cheerleading for capitalist imperialism?

It’s also true that I sometimes suspect that contests, with their proliferation of underexperienced initial readers, might have a problem of filtering out any work that is too too controversial, that makes some random first-year MFA nervous or upset. I don’t have any proof for this. Maybe I’m entirely wrong. Still, I have noticed that my angriest stories, the ones in which I rail against the injustices of patriarchy, the ones that run some risk of making male readers sad, the ones in which I admit that sex work wasn’t especially fun for me and I do not especially enjoy pleasing men all day … well, these stories tend not to make finalist rounds.

Maybe my anger just makes for inelegant, bad reading. I’m hesitant to assert that I’m suffering under any sort of discrimination, especially since, all told, contests have actually treated me pretty well. On the other hand, this is something that female, poor, non-white, queer, disabled, and all manner of other historically marginalized writers think about a lot: will I be penalized for my justified expressions of real pain, and in which contexts will I be penalized the most?

So that’s a thing.

But I’m getting away, a bit, from the actual title of this article, which had something to do with winning contests. Let’s say you have a piece that is just utterly gorgeous, does well in workshops, is universally adored by everybody you show it to, and doesn’t involve a furious and explicit condemnation of many readers’ worldviews. You should probably submit it to a contest! It will probably not win.

The thing about contests is that there are, among the top entries, many talented folks. The thing about winning contests is that first you have to enter an awful lot of them to gain much traction. Some people can’t afford this, or at least not until after they’ve already won their first contest. Me, I entered fairly sporadically until my first win, which I then used to fund the entry fees for the round of submissions that resulted in my second win, and so on.

So be not just good, but good in a way that makes readers pause over your manuscript. Stand out. Submit to a lot of contests if you want to win a lot of them. Perhaps don’t send it your most didactic diatribe. This is my best contest advice.

The why of winning contests is a bit harder to negotiate. It seems to me, having read for a couple contests, that the vast, vast majority of entrants have a zero percent chance of winning, in the same way that the vast majority of apps to top MFA programs can be rejected after a glance. These are folks whose work is just obviously not ready. Winning means reconciling myself to the idea that there are several hundred people out there who are getting bad advice, or who don’t have access to helpful workshops, or who are engaging in some very expensive wishful thinking, or who aren’t really plugged in enough to the literary writing scene to understand what sort of stories magazines are looking for—and I’m gaining materially from their confusion.

I’m not sure if this is ethical. I’m also not sure that if there has been a lapse in ethics, the lapse is actually on my part—I am, after all, not responsible for the structural issues that cause many writers to have unrealistic impressions of their own work. I’m also not sure whether there’s much to be done about me feeling weird, since contests are such a large part of The Way Things Are. They are how litmags make money.

Here is the good stuff about contests: First off, yes, there is a ca$h prize. Second, winning a contest is sometimes easier than getting into the same venue off the slush pile. In a contest, you are generally competing with other MFAs and those who recently obtained MFAs, and many contests even limit their submitter pool strictly to those who’ve never published a book. A regular slush pile, on the other hand, can be full of your professors and/or people who’ve got five or six wildly successful novels under their belts. I’d much rather pit myself against a thousand other MFAs in the Ploughshares Emerging Writer’s Contest, for example, than compete against a single Lydia Davis for the attention of a given issue’s guest editor.

Third, I’ve been solicited by shmancy agents who read my winning work from a contest. This was exciting! (Also nerve wracking, because I have too little to show them, ohnohelpyikesgaaahhhhpressure.) And while it totally depends on the contest, agents being more interested in some litmags’ contests than in others, winning can be a way to get the attention of someone who wants to bring your novel to the world.

Any questions about contests? Something I didn’t cover here? Ask in the comments!