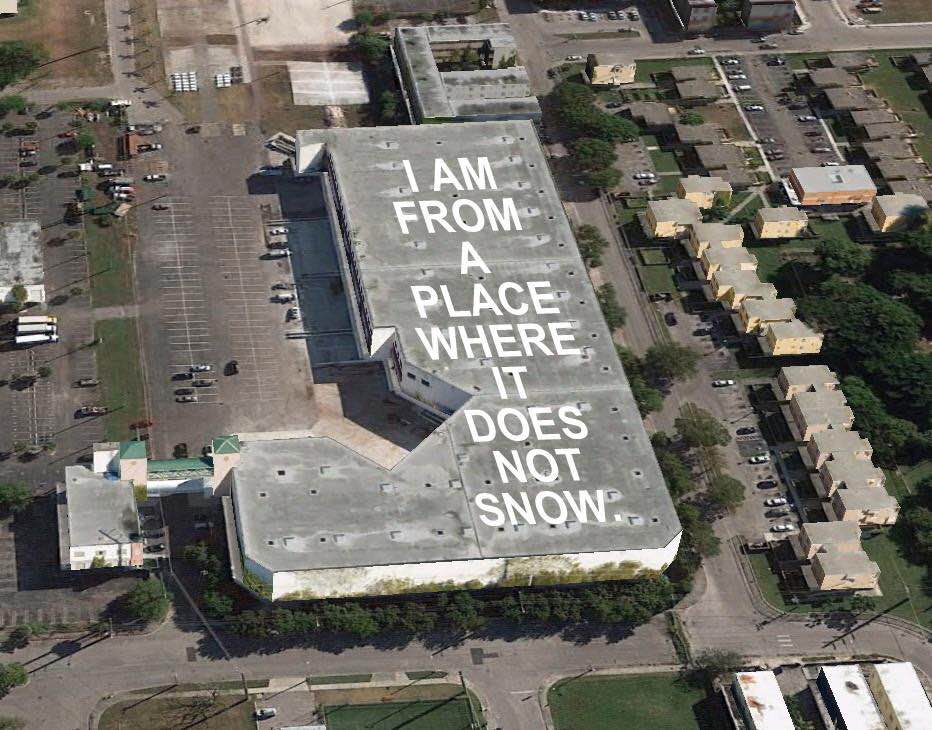 Weeks ago, I traded Lake Michigan for the Atlantic.

Chicago’s cityscape is often called sprawling, but on the morning I left, I was acutely aware of how it stood still as I became the one covering a greater distance: thirteen hundred miles, or twenty-one hours of driving. To the east, the sun cast a gold foil over the struttering waves of the lake. To the west, the circus din of Lollapalooza had fallen temporarily silent behind row after row of opaque security fences. A few blocks west of that, the city becomes mostly vertical. The Sears Tower stands straighter than most, once the tallest building in the world, now called something different. Just west of that, where the buildings begin to even out, is a school where, come Monday morning, my former students will gather to write poems again, like they have every day this summer, although this time, I won’t be there writing alongside them.

I can’t speak about Miami like this yet because I don’t have the language for it. Two weeks ago, I arrived here, to my apartment just off the Dixie Highway. I came without having ever set foot in my new home, let alone my campus. With me: my long-term partner, who was somehow convinced to come along, our dog, who had no choice, and two guinea pigs, who were placated with an abundance of vegetables. It gives me anxiety to know decisions I made have made an impact on their daily lives. Of course, their interests influenced how I viewed the options, but the choices ultimately came down to gut instincts–spreadsheets be damned.

The MFA application process is one of hyper-examination. Because a creative writing MFA falls somewhere between English academia and a studio art degree, there is a feigned level of objectivity in evaluating your work that is mostly dependent on aesthetic bias. For some of us, the application process also becomes a public performance among our writing peers, our family, & to semi-anonymous fellow applicants on online forums.

In accepting my offer from the University of Miami, I had to remove myself from waitlists and decline some other offers from other programs. It was a decision I made against the advice of many of those observing me in the process, some of whom wanted me at programs closer to home, others who thought I should attend a more “talked about” program.

I don’t understand why the University of Miami seems to be a less well known MFA program. It was one of the most generously funded programs I applied to, and it also has the lightest teaching load of any program I know of. But beyond that, to come to the University of Miami means to come to a metropolis of millions, with world class art and literary festivals, to speak nothing of the famous beaches, nightlife, or neighborhoods. The landscape is lush, brimming with vibrant wildlife and plants that make my already fading memories of midwestern fauna (to speak nothing of the winters) tint gray.

I’m not sure what criteria defines our perceptions of prestige when it comes to top MFA programs.

Maybe I don’t want to know.

In the beginning of April, I visited my then first choice program. I was only waitlisted, but they had called me several times to let me know their last offer was still pending, and I may have to make a quick decision, so I booked a trip. Over lunch, a professor detailed a problem of one of the workshop students. She was writing work that was deemed “too political” by her classmates. They were refusing to take her writing seriously, and she was unsure of how to gain their approval. When I later sat in on a class made up of nearly exclusively white male poets, I knew why.

To realize that I was perhaps being courted by my favorite programs for the wrong reasons was strange and shocking. Although I have experienced sexism and queer erasure often in my life, my pre-MFA literary pursuits have often been a source of reprieve from such transgressions. I naively had not realized that MFA programs are not excluded from the rampant under-representation of women and queer-identifying individuals, particularly if they are also people of color, that is pervasive in academia as a whole. I had mostly chosen to apply to programs that pitched themselves as being inclusive.  My application materials focused on my interest in queer poetics and feminine experiences of violence with the intent of weeding out schools that were not mutually receptive to this work. I never considered that it could have the opposite effect: that my poetry could be seen as a bullet point in a response to criticisms of hegemony within an academic writing program.

Miami was one of the few programs where the faculty’s values in terms of both writing aesthetics and literary communities were in line with mine. The evidence I found supported this impression. For example, my first introduction to the program was poetry professor Jaswinder Bolina’s essay, The Writing Class, in which he condemns the proliferation of socioeconomic injustice both within academic writing programs and aesthetic biases. In the hours of conversation I’ve had with faculty and current students, I’ve felt affirmed that Miami’s program was one where I would continue to be engaged in the socially conscious work and dialogue that’s shaped my writing up to this point. It was this impression that made Miami the clear choice.  Worse case scenario, I’ve landed myself in a city that will offer plenty of respite should I need it.

Next week, I’ll have my first workshop. I’ve spent the summer laboring over a lengthy hybrid work inspired by serial killer Aileen Wuornos. Evidently, I’m still taking the same approach to this course that I did my applications: unapologetically sussing out the hospitality to my writing interests and, by association, identity. It may not be a wise decision, but I haven’t yet learned to do things any other way.