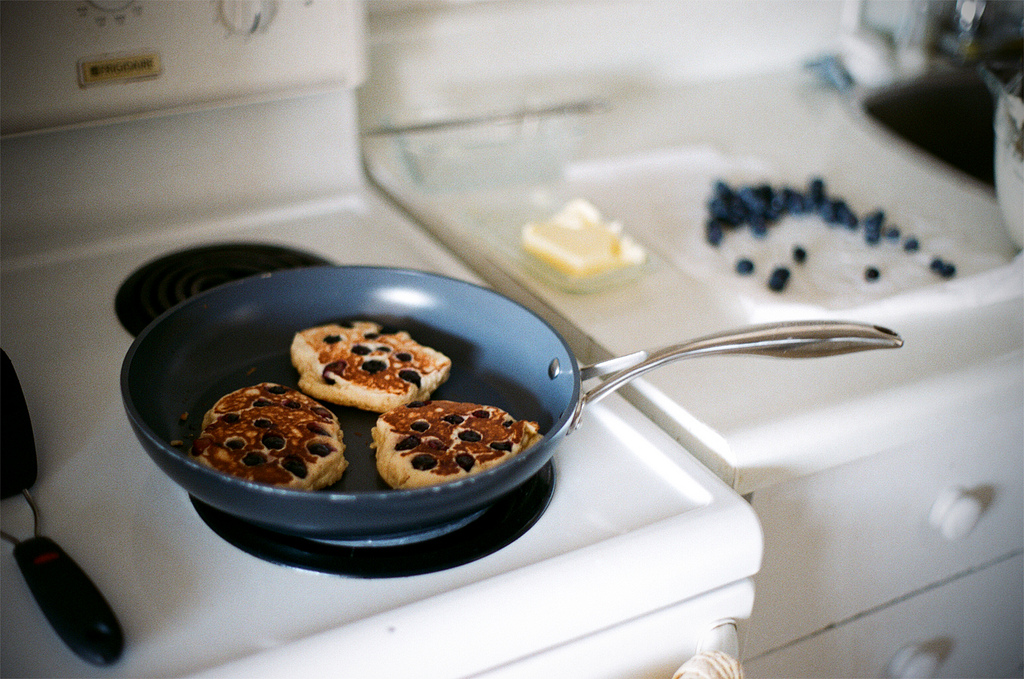 Some say that when you’re making a stack of pancakes, you always throw out the first one. It’s a test to see if the batter holds together; if the griddle is hot enough; if your flipping technique is finally perfect after years of making stacks upon stacks upon stacks of pancakes. The first pancake is the first try, the freedom to make a mistake, and to be flawed. I thought about this when I showed a professor the first draft of my statement of purpose for an MFA program in fiction. I was apologizing for my draft’s shortcomings before my professor even said anything. “It’s just a first pancake!” I’m not sure if I meant the statement or the application process overall.

In case it wasn’t obvious, this is my first year applying to MFA programs. I’m currently a psychology student at Columbia University—that probably makes me seem younger than I am. I was a high school dropout at 13, a GED earner at 23, and I applied to Columbia at the age of 26, when I already felt too old for all-nighters and bars that ask to see ID. Columbia was the only college I applied to and I did it, in part, because my life felt so overwhelmingly stagnant. College, an Ivy League one at that, seemed like the most radical and reckless thing I could do at the time.

My MFA process has been nothing like my undergraduate process. If my pursuit of a Bachelor’s started off recklessly, my pursuit of a Master’s has started off methodological and precise. I spent this past summer researching programs. I bought books and read blogs. I lurked on Draft like my life depended on it. My spreadsheet—of course I made a spreadsheet—is colour-coded and thorough. Every time I open it up, it’s like a unicorn barfed skittles on my screen. It is optimism in its ridiculously technicolour glory. Yet I don’t feel prepared at all. As deadlines loom, I find myself cutting and adding schools, searching for that one last recommender (one of mine got sick late in the game), and poring over my statement of purpose to make it shine bright like a diamond. Except that is an effin’ lie because diamonds don’t shine: they reflect and refract light according to their cut. These are the kind of things I learned in my science classes. These are the kind of things I think about instead of my essays.

When I first started college I almost majored in creative writing. Almost. But I’m a first generation, low income student from the South Bronx. I’ve always wanted to be a writer, but I‘ve also always wanted to get my family out of the ‘hood. I went to college with that idea that I would follow the wise words of Michelle Obama and pull members of my community through the same doors I had opened for myself. I wasn’t sure I could do that with writing.

When I told a friend, he agreed. “All this money and time for writing? You don’t have to major in that. Be a scientist. Be a researcher. Go into academia,” he said. So I put writing on a side burner and double majored in psychology and philosophy. It wasn’t until my junior year of college, when I had room for exactly one elective, that I took a writing workshop. Three weeks into the class, I dropped my philosophy major in order to have more room to take workshops. I freaked out during a meeting with my writing professor, a poor grad student who seemed genuinely alarmed at my emotional outburst. “I think I need an MFA. I need to write,” I said. She grimaced and shook her head. “I mean….do you want to go into more debt?” If that comment was meant to deter me, she failed miserably. I feel that I could put up with endless years of pancakes and closet-sized bedrooms if it meant that I could have more time to write.

In June of 2014, I applied to the Vermont Studio Center’s writing residency. I wanted to see if my writing was good enough by their standards and if I could stand to be alone with my writing for so long. I was accepted and decided to go in January. I kicked off 2015 in the tiny town of Johnson, wearing a million layers of clothing while simultaneously uncovering who I was as a writer, an artist, and a person. I was the rookie in my group, the lone undergrad who arrived not quite knowing where “this writing stuff” was going for me. To call the experience magical is cliche, but it was fucking magical. I wrote constantly, spending more time with my characters than I ever had before. I read books for fun for the first time since I started college. Most importantly, I found a community who understood my strong desire to write and didn’t deter me from it. I heard amazing stories about graduate school and the gift of time it offers you. I heard the horror stories too. By the time I left Vermont, I had decided to pursue the MFA.

To be fair, I genuinely love psychology. It wasn’t a consolation prize for me and the four years I’ve spent on it have had an effect of me. Working through problem sets—so many problem sets—made me more disciplined. Learning how to conduct proper, ethical research, made me more principled. Having to study neurological disorders made me realize that writing, too, can be studied and taken apart in order to gain a comprehensive understanding.

Of course there are the expected benefits of being a psychology student too. Whenever someone in workshop is struggling with a character’s mental illness, all eyes turn to me. I once gave an in depth explanation of dissociative disorder to the entire room and offered suggestions on how to make it more believable in writing. At least one of my critiques has included a small diagram of the brain in the margins. “This is how a stroke would really affect your character,” I wrote. “You should change this paragraph to reflect the actual science.” It’s a miracle I haven’t had any of my critiques crumpled into a ball and chucked at my head. (Yet.)

When it comes to being queer, I never had a traditional coming out. I probably exited the womb clutching purple glitter in my fist and threw it over my mother’s head while the doctor announced my arrival: “Congratulations, it’s a queer!” My mother knew who I was before I did and she dragged me to the NYC pride parade as a child, supporting me in ways I didn’t quite understand until I was older. I never hid my queerness from her; it was never anything I felt I had to hide. I can’t say the same for my identity as a writer. I kept that secret for a long time, concealing my stories from my family, mentioning the writing workshops I was taking nonchalantly the way anyone else would talk about going to get a manicure.

Once I decided to pursue the MFA, I knew I had to come out of my creative closet. I told my mother first during a visit home that summer. It was like something out of an afterschool special— me sitting at the kitchen table, palms pressed against the wood, trying to keep my breathing steady. I decide to rip off the band-aid in one fell swoop:

“Lord Jesus, not a writer! Are you sure? Is this just a college phase you’ll grow out of?”

Okay, so my mother didn’t really say all that. But I thought she would. Instead she patted my hand, told me I could do anything, and that I should consider staying on the east coast. She didn’t ask to read any of my work; I didn’t offer. We’re not there yet.

So here I am just two weeks away from my first deadline, hoping I have enough time,, enough talent, and enough dedication to get into at least one school on my list. Applying to graduate school would be tough on anyone, but it’s especially anxiety causing when you’re a queer, disabled person of colour. My list of choices has been ripped apart, torn down, and put back together more times than I can count. A school on the east coast was cut from my list when a disabled student told me she was having a horrible time getting accommodations. A school in the midwest was cut when I realized it didn’t have any faculty of colour. A school in the south was cut when I realized it was in the deep south. I know, I know, stereotypes can be ugly things. But everyone has their list of wants; being this intersectional means I’m having a harder time finding my place than most. I know it exists, and I’ll find it. And maybe just maybe, I’ll get accepted there.