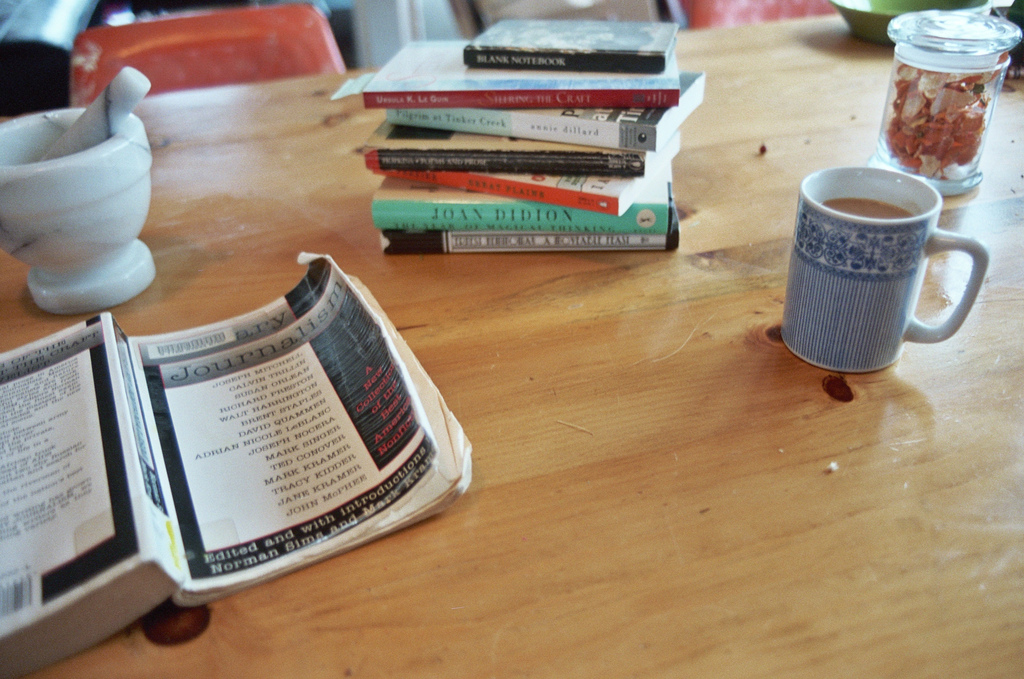 It’s that time of year, isn’t it? You’re frantically searching Google for any advice when it comes to applying for programs. MFA Draft is picking up, you start writing those letters to your recommenders asking them as kindly as you can to please send that letter (because you have been stalking them on Facebook, and it seems they have time to upload pictures of their new puppy in a bumblebee costume but no time to upload your recommendation).

But I mean … can you blame them?

I remember the moment I realized I was going to an MFA program. I was twenty. I was a junior in undergrad, majoring in Playwriting and English. I skipped my Directing class to follow my best friend downtown to the Hilton to go to some weird conference called AWP. The next thing I knew, it was four days later, and I was hellbent on getting into one of those schools that set up shop at the hundreds of tables in the Hilton basement.

I could spend another three years with a small cohort, learning how to write things?! I could be one of those cool people at the panels talking about fancy things? I watched my best friend’s mother breeze through small talk with some of the biggest names in literature, and I had my new goal for adulthood.

I applied to MFAs for three years. Three rounds of the MFA Draft, three rounds of writing samples and asking for rec letters. The first time, I’d just met my now-fiance, and my concentration was not what it should have been. There was also the little thing of applying to only four: Cornell, Brown, Iowa, and Michigan. You can imagine how all of this ended up.

The second time was to one school: a school in England. Finally, I would escape my poor provincial life by packing up, leaving my boyfriend and family and job behind, and … moving to a poor provincial town. But it was across the ocean! The ocean!

Unfortunately, a couple of things happened between me accepting their acceptance and me actually packing up and heading over to the land of questionable food and sexy accents.

First, I got a tumor for Christmas. Thanks, Santa. Fortunately, they caught it in time, put me under observation, and I lived to see another day. It was a bit comical how much I wanted to go to England; I wasn’t even completely awake, still lying in the recovery room, when I made it clear to the doctor that no, I was not doing a follow-up procedure in October, because I was moving to England, dammit! I called my best friend on the way home. “I might have cancer,” I sobbed and slurred, “and they won’t let me go to England!”

Unfortunately, the tumor wasn’t the only problem I had.

Two years after graduating, my boyfriend and I returned to my undergrad’s English department to give a speech to the Writer’s Guild, a program I started when I was still enrolled. I was supposed to tell the students why I’d started the group (to meet guys) and how it was in the first year or so (usually conducted at Potbelly’s, because we all had a hot sandwich addiction). But as we waited for the engagement, my professor spotted me. We discussed life, and eventually England arose.

“It’s an MA?” she said, taking out her verbal katana. She poised it over the neck of my dreams and hopes. “Well, an MA isn’t going to get you a job at the college level. You need an MFA.”

Slow clap for the murder of dreams

“There’s a difference?” I said, weakly.

Turns out there is. And the hunt was on again.

This time, I took no prisoners. Twelve schools. All different tiers. Some big players, some middle ground, and some safety schools. I studied for four months for the GRE. I joined three writing groups to work on my writing sample. I got into stupid arguments on MFA Draft. I worked closely with references. I read books. I did my homework.

But Iowa wasn’t on my list. Neither was Cornell. Neither was Michigan. This time around, I was a little wiser, a little more confident in my own works. With a book and an anthology under my belt, I knew what sort of a writer I was. I will never be Joyce Carol Oates. I’ll never write Olive Kitteridge. As I discussed in an earlier blog entry, I’d discovered a deep dark truth about myself: I was a popular fiction writer. I wrote science fiction, alternate history, dystopian, Steampunk, fantastical drivel. Beautiful, exciting, awesometastic drivel.

As I came out of the literary closet, I decided I needed to find a safe space to learn. And that’s why I picked Stonecoast. It’s the best in popular fiction, it’s full of a star-studded faculty, and it was perfect for me.

So my advice? Go find the school that will make you happy. Don’t not research, don’t wing it, and don’t not make it a priority. Don’t just go to a program because it’s in England or because it’s the Writer’s Workshop or because you’re bored in your own life or because you don’t think you won’t get into another one. Choosing an MFA program is sort of like choosing someone to marry; you want to wait for the one that you won’t want to smother under a pillow. You want to find one that will make you happy, even if you have to wait another year to find it.

But most importantly, don’t give up. If you don’t get it this year, don’t stop trying. I was twenty-six when I was finally accepted into a program I loved. That is a six-year journey to find where I belong.

(Disclaimer: None of my recommenders uploaded pictures of puppies in bumblebee costumes instead of turning in my rec letters. All of my recommenders did an amazing job, and I had absolutely no problems getting my stuff in. So final piece of advice: Pick people who will have your back.)