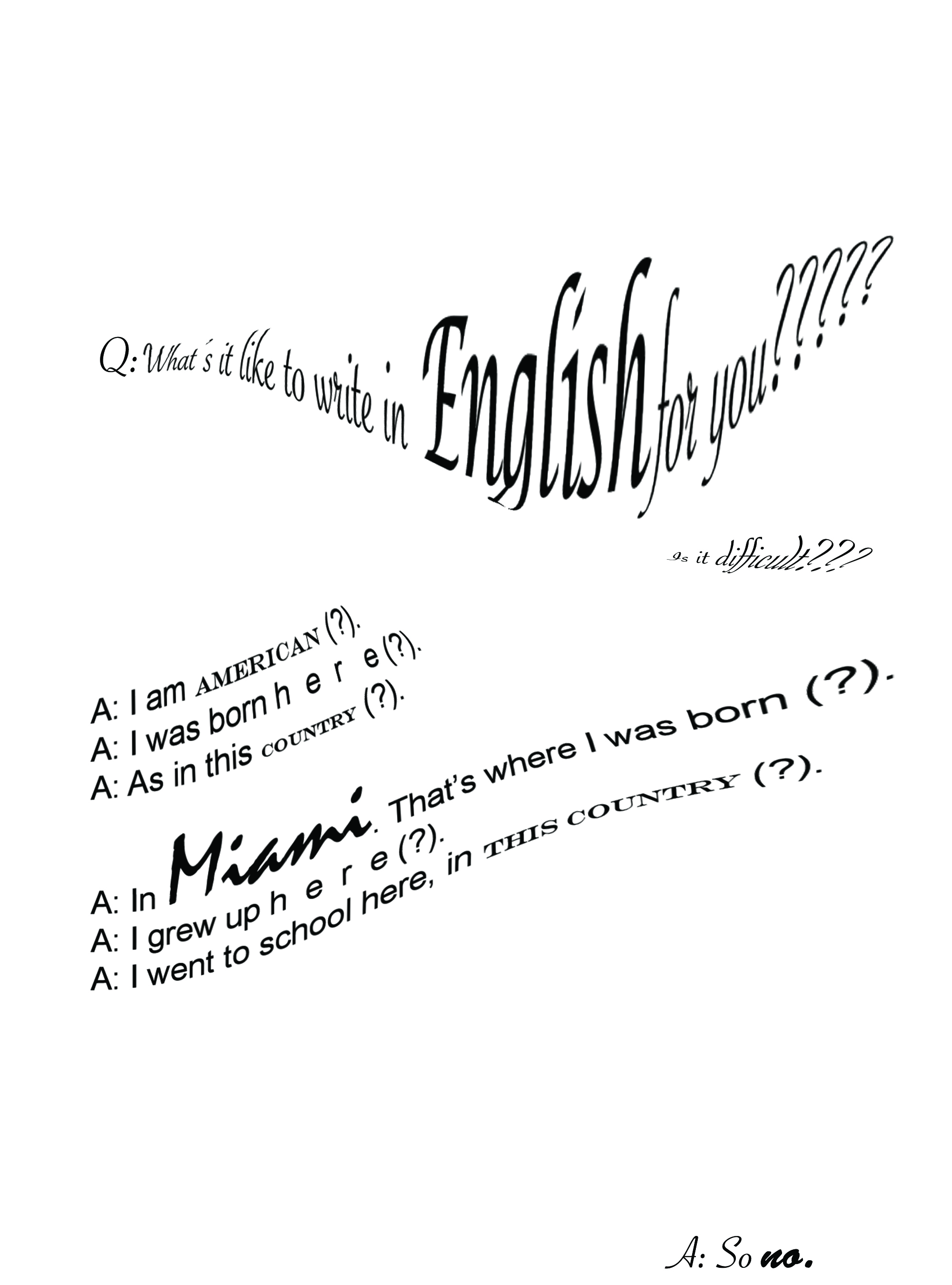 I’ve been hesitating with this post for a while because I don’t think I still quite know how to appropriately articulate what I’ve been feeling, but here it goes. Maybe it’s because these are the narratives I’ve been taught as a woman of color, even in my own household — stay quiet and be grateful. But I am grateful, and we’ve been shushed for too long.

These are my very brief two cents.

Having grown up in Miami — a minority-majority, strange placewhere Spanglish reigns as the official/unofficial language of the city — my experiences in predominantly white circles had been limited. Business signs are in Spanish. I speak to my parents in Spanish. For seven words, you toss in three in Spanish. It’s arguably fair to call Miami the capital of Latin America. But despite having grown up wishing Celia Cruz was my celebrity grandma, I’d spent most of my life reading predominantly white literature. I learned, early on, that names like my own were nowhere to be found in books. Much less my everyday language, and all the people I’d grown up with. But unable to write fiction, or so I thought, I had no one to write about but myself and my wacky little life, and just when I thought I was alone (and a grand innovator), I discovered Junot Diaz, Toni Morrison, and Sandra Cisneros and they rocked my world. This, all the more, prompted me to stop naming my characters ‘Katie’ for the sake of making them more like everything I’d ever read, and opted to keep them unabridged, nice and Miami, like ‘Carmelita’ instead.

Living in Chicago now, despite the large Mexican-American community (which I would thank God for everyday if I only believed), really feels like “America.” And possibly being in an MFA program, even more so. (I’m very upset a local bar that does karaoke on Sundays has Selena songs on their list, but none of them are in Spanish. It’s a very sick joke.) I thought I’d understood that I was a woman of color, but I think that it’s been here,  in Chicago and in an MFA program, that I’ve felt even more so what it means to be a person of color. And I’ve also learned that the term itself, POC, is still something foreign to many.

Foreign. That is how I’ve felt on occasion in the MFA. Foreign in my own country. Foreign in my speech. I had to go through my place of birth, country of citizenship, and childhood education to explain to a faculty member that no, I did not have difficulty writing in English simply because I was Mexican. It’s fair to say 2017 is a year that undoubtedly left many of us angry. (To blame: deplorable, Cheeto gremlin who will not be named). But I was surprised to find that there were moments in my every day, in this institution that I supposed to be so progressive and liberal, and in our workshops that left me and a few others feeling the very same kind of angry.

I found my work was sometimes received with silence during critique — and my work only. No one had anything to say. Not even the classic art-school, go-to moniker: “interesting.” Another time I presented a humorous piece that was critical of neoliberal strategies in Latin America (AKA very serious subject matter), and was referred to Youtube Poop by a classmate. And so I found myself reevaluating my work, my ideas, and my life, and asking myself: “Damn, is my work really that bad?”

But I also wondered if it was the Spanish in the work? The references that no one else, in this classroom, knew or could relate to? Maybe in this instance, it really was that bad.

And so, for some parts of my first semester I felt confused. Upset. Beyond the obvious reasons of what it means to be in this highly competitive institution, I felt unsure about the work I was making. Feedback during critiques was reticent; never spoke to the content of my work. Was this to be the general response? What about my work posited it as a somewhat foreign oddity? Why was it that what was seen as a point of interest was the “exoticness” of a piece of writing?

At the beginning of the semester, new to the program + city and unsure about what I was experiencing/feeling (I wondered if it was all in my head or if my work was really that bad), I thought perhaps I was alone in this. As the weeks went on, it became clear I was most definitely not.

I started learning of other people in my graduate program that had felt similarly at times, and as the weeks went on we also seemed to be coming together (or I closer to them). There was a feeling of being unable to get through; having to over explain, justify oneself, code-switching for the sake of being perhaps “understood.”

Towards the latter part of the semester, I attended a weekend-long writing and performance art workshop, where QTPOC folk and allies were welcomed (I am paraphrasing the workshop description here). I had no idea how incredibly rejuvenating it was going to be to have a weekend, just a mere weekend, dedicated to work by queer and artists of color, whose narratives are often left out in the grand scheme of the MFA (and it’s sad these things have to be relegated to a function like a two-day workshop). The workshop gave me life: a space to not feel like a foreign specimen presenting, where my work wouldn’t be ‘exoticized’ or dramatized to be tokenized. And I think its safe to say that MFA programs need more of this. More writers of color. More programming by people of color for writers of color.

This second cent got me through the first cent. It was the community I found, the workshop, a class on code-switching in poetry and all the wonderful material I came across thanks to it, that all made me realize that I do not have to feel foreign. My work can speak to people, be it with un poquito de español or not. And if those two words add another layer of meaning to you, then my work is for you.