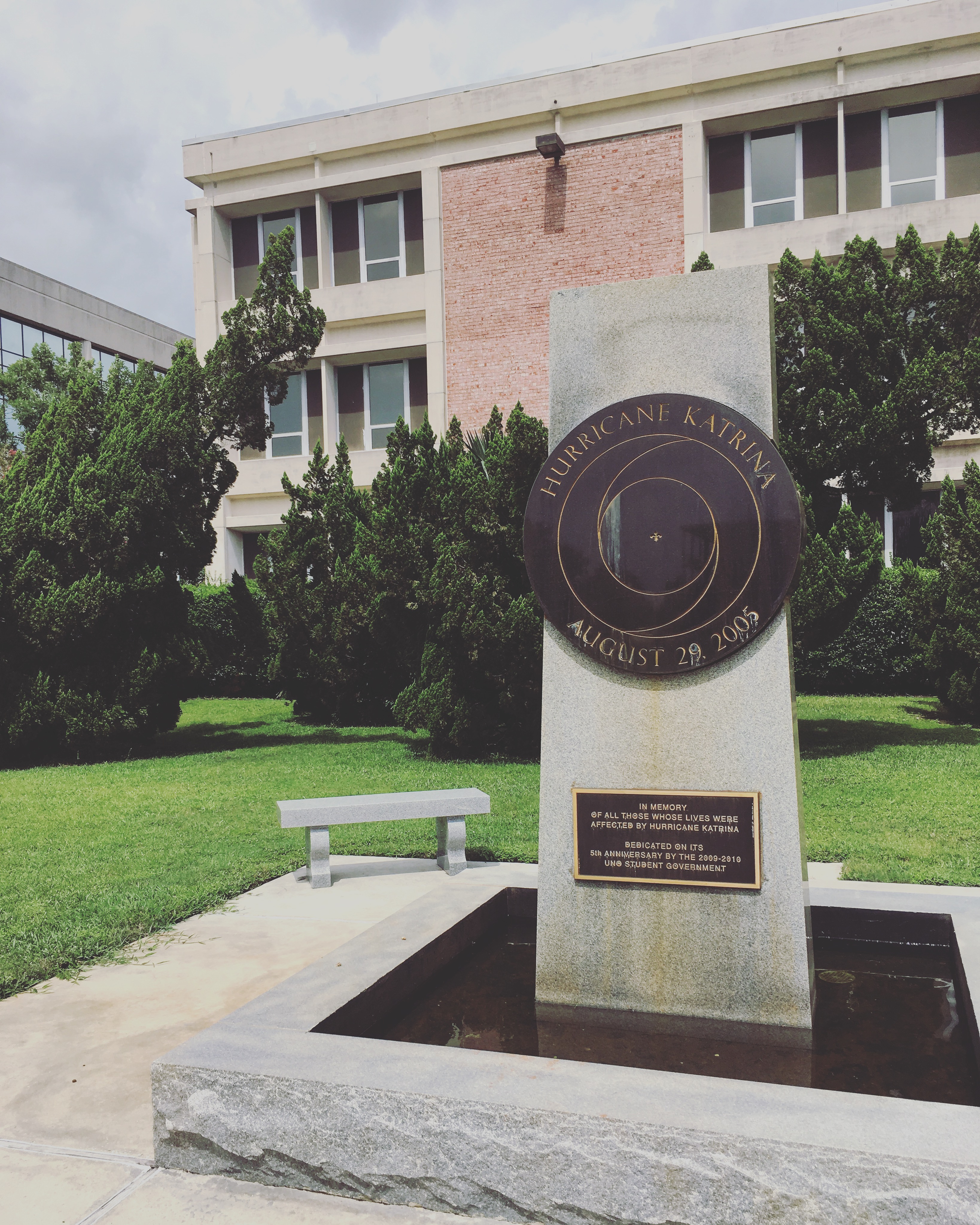 August 29, 2017 feels a lot like August 29, 2005, except instead of watching New Orleans get pounded by Hurricane Katrina in a Houston hotel as an evacuee, I’m now watching Houston get pounded by Hurricane Harvey from my home in New Orleans, the same one I evacuated from 12 years ago. Everyone that went through Katrina, myself included, feels like they are reliving Katrina today. We’re safe, but the intense rain we received over the past few days has us all on high alert as we relive the trauma and watch the streets of Houston turn into raging rivers.

University of New Orleans had ankle deep water on campus yesterday. Classes were cancelled on Monday and there is no school today because of flood warnings; while we won’t get hurricane force winds, we are still bracing ourselves for disaster. Parts of the city flooded twice last month thanks to broken water pumps— an entirely avoidable situation. I’m trying to take advantage of my extra free time today by getting ahead on homework but I’m distracted by the news from Houston. At any second I could burst into tears; maybe I should stop watching abandoned dogs being rescued from tree tops and car roofs.

Aside from the storm, school has been good so far. I’m now in my second full week of classes. I’m taking three classes: Fiction Workshop, Nonfiction Workshop (my genre) and  Craft of Nonfiction. My nonfiction workshop professor sweet talked me into going first for critique. I told him yes, knowing I would have to tighten up an essay I started working on months ago. When it came time to wrap it up-—a hike on an unmarked trail at the bottom of the Grand Canyon—I just couldn’t connect the dots. Some people groan about their stories’ beginnings and endings but I have a much harder time with the things in between. I scrapped the essay and started a piece nearly from scratch, working off some notes I had started for another project. I turned it in on time, was pleased with my work and pleased with the feedback I received in class.

I have a long history with UNO. I enrolled as a sophomore back in 1999 after taking classes at a community college my first year out of high school. I took a semester off in 2001 then dropped out again in 2003. After 10 years of wishing I had finished my undergraduate studies, I went back in 2013 and graduated in 2015 with two bachelor’s degrees in English and film & theatre arts. I thoroughly enjoyed my second stint in school. I was active on campus for the first time and took advantage of all the school had to offer. I participated in undergraduate literary readings, served as Editor-in-Chief of the school newspaper, did a summer abroad program in Ireland, and made lifelong friends—all things I would have never done in my early 20s. I felt like I was just warming up when I graduated, so after completing a year-long fellowship at my local newspaper, I applied to three MFA programs. I got into two and chose my alma mater, which was the right decision. Coming back to campus felt like reconnecting with an old friend.