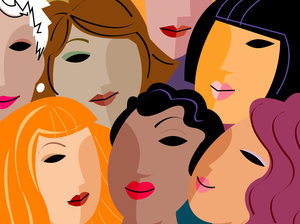 I am not your perfect liberal.

Sometimes I accidentally mess up gender pronouns, and I watch television shows that sustain the patriarchy (The Bachelor is such a juicy mess this season). Sometimes I date self-obsessed men who fuck with my self-esteem, and I take way-too-long to delete their phone numbers. Every day, I hang out with educated people in the small liberal circles at my university. I don’t spend enough time volunteering in the communities that are like the one I came from. I’m a masters student now. I went to a fancy college. I write things and they get published sometimes. To many folks, I’m living a version of the American Dream. But what am I currently doing to help the people who grew up like me? To let them know that I hear them? That I am still here for us?

Nobody in my family voted for Trump. I come from poor people. Poor brown people. Immigrants. My father cannot legally vote. Of course, I always knew that America was never a place geared for people like me to succeed, to feel “part of.” Growing up, I was reminded of this constantly: When my father didn’t attend my parent-teacher conferences at school because he couldn’t speak English; when my mom missed my choir concerts because she worked swing shift at the hotel she kept clean; when I watched my father leave the courtroom in handcuffs, headed for a year in prison.

Where I come from, America does not set us up to be winners.

A couple of months ago when #buildthatwall was scrawled in chalk across a busy courtyard on Alabama’s campus, I was not surprised. It hurt when I saw it; I think I was temporarily delusional and forgot that I walk across a college campus in the reddest of the red states, a campus with a deep history of institutionalized racism.

I forgot. Temporarily, but I did forget. I was stuck in my liberal bubbles.

I forgot that in the southern city I live in, confederate flags fly high. That a man with a confederate flag dangling on his car keys will want to have sex with women like me, but will vote against me, and my well being, every time he steps into that polling booth.

I forgot that when I started writing as a kid, teachers underestimated me, their mouths wide open in awe that I could spell, let alone put a sentence together.

I forgot that I started writing about people like me—fat, Latinx, poor—because I didn’t read these stories in school (certainly never before college).

I still forget that people are surprised when they find out where I attended college, when they find out that I went to college at all. The baffled looks on their faces, a smack to my self-confidence and a reminder that, in their eyes, I will never be a whole person, a person who is multifaceted, flawed, and capable of a great deal.

When you are “other” in this country, your stories are elbowed until they’re shoved into the margins.

When you are “other” in this country, your stories are buried, like time capsules, then decades later, dug up by white Hollywood producers and made into a blockbuster movie. Later, everyone will ask, Where has this necessary story been hiding?

When you are “other” in this country, your stories will often never get told at all. Because your public school failed you and you were not encouraged to write in your spare time. Because you had to quit high school to work full time and help your family with groceries. Because you are dead, gunned down far too young, before you could write your bestselling memoir.

Because ain’t nobody else gonna write our stories for us.