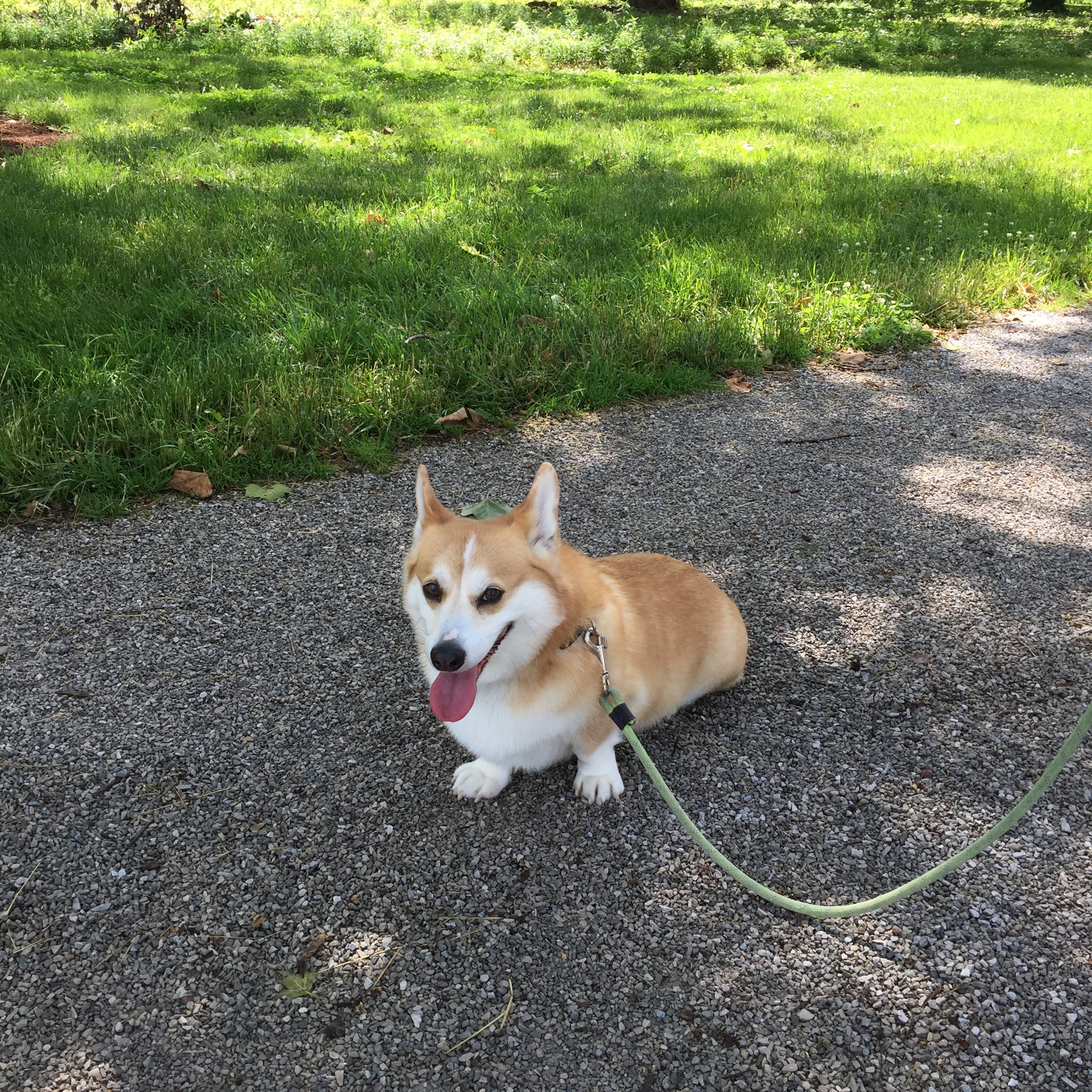 This morning, I woke up in time—before I had to start rushing for work, before the heat turned us both into puddles—to actually take my dog on a decent walk. Titus, a corgi, loves gallivanting through his territory, a little Napoleon up against the big dogs who roll over in his presence. He loves people, especially if they have food, and he loves finding their leftovers in the grass, often gulping them down before I can stop him. As a kid, the only family dog I remember well enough to have had a bond with was a mutt named Tristan—with the colorings of a German Shepherd and the floppy ears of a Golden Retriever, plus the curly tail of a Shiba Inu, he had the attention span of a third-grader on Koolaid. While Titus’ favorite activity on walks is sucking up anything remotely edible like a vacuum sucking up Cheerios under a toddler’s high-chair, my childhood dog Tristan lived to chase cute little woodland creatures. He’d run from window to window in our house, slobbering all over the glass and leaving scars in the wood. He’d fog up our van’s windshield barking with hot breath at passing deer. He knew the word “deer,” though we could say “beer” and he wouldn’t know the difference.

Titus does not live to chase cute little woodland creatures, simply because he often doesn’t see them. He does chase bugs and often eats dried worms off the sidewalk, and he enjoys running in circles with ultimate derp. But unless I can point his eyes straight at a chipmunk or tree chicken, and unless that chipmunk or tree chicken is fewer than three feet ahead of us, he doesn’t care. Even when he does end up lunging towards the scent of a squirrel, he gives up in seconds, distracted by a potential turkey leg in the gutter.

At six forty in the morning in our graduate student mecca of a neighborhood, we were alone on the street. As I led him to the left from our apartment complex, I noticed movement behind a parked car several yards ahead of us. While Titus sniffed vigorously at a rock, I noticed what I thought at first to be a genetically modified rat and what I realized was simply a very large possum, one we had seen previously on an evening walk, making its slow way across the sidewalk to the empty lot next to our building. I worried it was sick, out in the sunlight like it was, and my concern grew when I thought I was looking at a dark gash in its side. As it walked, the gash moved, and I understood that it wasn’t a gash at all but a litter of tiny possums hanging onto their mother’s back. Titus ate a bug.

The past couple of days have left me in a haze. I grew up in a world that was much more welcoming to my queerness than even the world my wife grew up in, the world my parents grew up in, and their parents. In many ways, I was shielded from the realities of LGBT+ violence because these realities were not mine. What I inherited from the historical leaders of the LGBT+ equality movement was justified pride, but it was also fear. I knew to be afraid. I knew to be careful. I knew to scan the bar before getting comfortable. I knew to clarify before the start of a meal out that yes, one check is fine. I knew not to hold my wife’s hand down certain streets, not to fly off the handle at other drivers, not to put rainbow stickers on my car because of all the cross-country driving I do. I knew not to mention my home life unless I felt safe, and even then, I knew I could not normalize it the way my straight peers normalized their relationships. I knew that when I got married, some people would refuse to acknowledge that she is my wife. I knew that I’d have to be careful how I worded cards to my grandmother, and that the cashier at the store will always ask how we want our groceries split.

But I had not yet had to witness the hate against people like me in action, not like those before me had. I had not yet had to witness—much less experience—my peer group suffer like this. Not like this. I am queer, but I am white, I am American. I never had to worry about my immigration status being questioned, or being shot for wearing a hoodie. I grew up in a major religion. I am privileged, and I do not want to appropriate a grief that isn’t mine. Like so many of my socially aware friends and newscasters I listen to have pointed out, this attack wasn’t just targeted at the LGBT+ community, but at the Latinx community, at the black community, and will have lasting effects on the Muslim American community as well. And this isn’t the first time.

I went back and forth on writing a post about this because I do not want to speak for those I have no right to speak for. To me, though, writing is always about speaking for someone—whether it’s a part or all the parts of a self, or for the selves this self affects in her daily life, or for the strangers who read this self and take something away from it. To write “for” is to write “on behalf of,” but it is also to write “to.” I am writing to someone. I am writing for someone.

There are actionable steps we can take. We can write and call our lawmakers. We can give blood (well, not all of us, *sigh*). We can speak for each other, to each other, with each other. But I think the most important thing we can do is listen. And so this morning, on my walk, I listened. I listened to the sight of a bunny with its ears flat, watching my oblivious dog pass by. I listened to the sight of a cooked baby bird on the sidewalk. I listened to the sight of maggots in the dumpster I tossed my dog’s waste bag into, and the sight of a mural of a gray seal painted on another dumpster’s side. I listened to the woman walking up to a group of construction workers with a thermos of cold water, to the black lab puppy whimpering at us, to the woman with the sheepdog who kneeled at Titus’ feet. To the woman who crossed the street when she saw us who was likely afraid of dogs, maybe because something had happened to her, once. To the kid waiting for the city bus that was always late. To the squirrel that ran up a tree, to the big dog with a tiny head, to the woman in a sports bra and workout shorts, was she asking for it? To the bumper sticker pasted on a street light pole, demanding that we “Make America Great Again.” To the thought in my head that responds, “Were we ever?”

To write is to observe, to consider, to listen. To write for someone is to write to someone. And I am writing to you, asking you, pleading you: observe, consider, listen.