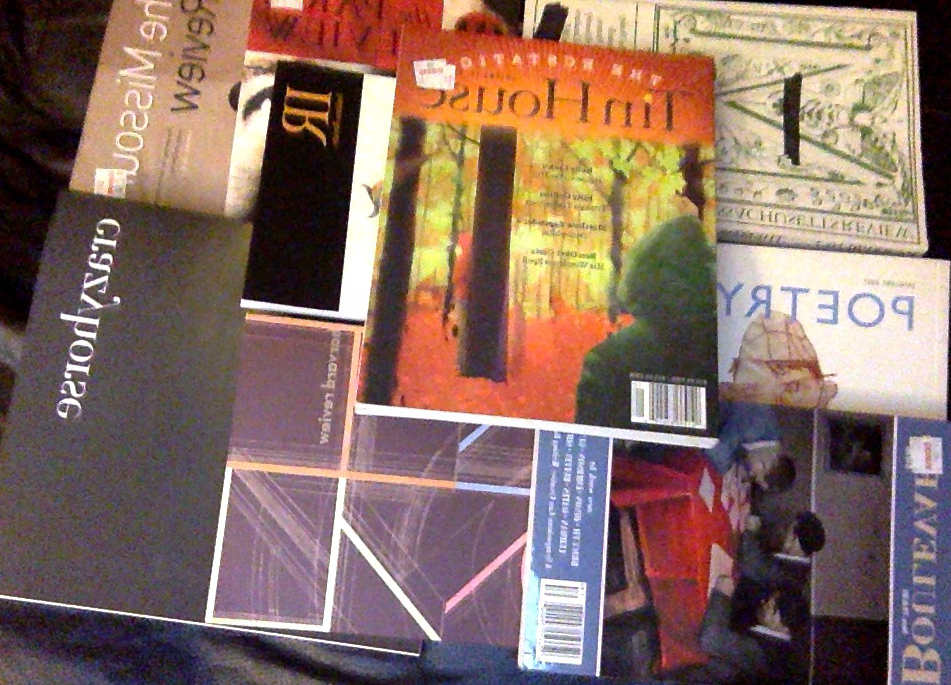 I read stories. A lot of them. I am the sole fiction editor for Reservoir, and I read (and edit copy) for Raleigh Review, an up-and-coming litmag founded by MFA alums from North Carolina State University. I’ve read for a couple other journals in the past, and been a preliminary reader for a couple of literary competitions in fiction, nonfiction, and poetry as well. I’m fairly sure this all added up to about two hundred stories last semester, from flash to novellas, and maybe another fifty poems, dozen essays, and thirty-five poetry collections.

And sometimes I come across people online or in real life who have no insight into this process, a great many misconceptions as to how their work is being read. People who submit scattershot for years on end without success, or—and this is sadder to me—talented, sensitive writers too intimidated to submit at all.

So let’s provide a little insight. Let’s clear up some misconceptions about submissions.

This is simply not true, as demonstrated by my experiences and those of people I know. There are a lot of excellent literary magazines out there making a point of publishing work by people without graduate writing degrees. Glimmer Train gave first prize in its Fiction Open to a friend of mine, then published her, based on a story she wrote in the gap between her undergraduate and MFA degrees. New Letters awarded me the 2015 Alexander Cappon Prize for work I completed and submitted while finishing up my undergraduate degree. Even before then—in my sophomore year, actually—I entered work in CutBank’s Montana Prize that the magazine chose to publish.

Going behind the scenes at literary magazines has only reinforced my impression that most don’t care which degrees you have. Raleigh Review’s readers are evenly split between those with degrees and those without them, and so I doubt any of our fiction-reading teams are thinking that only MFAs are worthy or good writers. At The Journal some other first-year fiction readers and I will often discuss how we don’t read the cover letters until we’re finished with the story, just to make sure we don’t develop an unconscious bias for or against a given submission.

(Caveat: Obviously there are going to be litmags that care about your degree more than others. I cannot vouch for the folks at The New Yorker. Still, I suspect many swank venues are giving equal consideration to MFA-less writers.)

It’s amazing how much agreement happens in my fiction workshop, how much has happened between me and other fiction writers I’m teamed with on both The Journal and Raleigh Review. I don’t believe this to be a function of the MFA itself—I’m usually paired with a non-MFA reader at Raleigh Review. Rather, it just seems that most people with a strong interest in contemporary literary fiction have similar ideas about what constitutes a dealbreaker. They’ll turn down flat the vast, vast majority of stories people send to litmags, and they’ll usually have the same ideas about which stories those should be.

All of which is to say that it’s not actually likely the twenty-first magazine will love something twenty other magazines hated, which bodes ill for the story that’s gotten twenty form rejections. It is somewhat more likely if many of the first twenty magazines wrote a personal or tiered rejection, encouraging the submitter to send more work. For my own part, I would only send a piece out again if the first twenty magazines had some favorable response (and if I really believed in the writing).

Good news! Even if I genuinely can’t stand your work and reject it within two minutes of opening the file . . . I won’t remember a thing about you fifteen minutes from now. I’m too busy reading the other dozen submissions I hope to plow through today. Go ahead and submit again; odds are low you’ll get the same reader at one of the bigger mags, and even if you do, odds are low anybody will recognize your name.

Stop right now. There are two reasons you could have done this, and neither makes you look good. Either:

1. the work is not ready to be published. It’s unedited and unrevised and unfun, and you couldn’t convince anybody to put it in their litmag. You are throwing it up on your website anyway because you are unjustifiably proud of something that just isn’t there yet.

2. the work is ready to be published, but you couldn’t figure out how to send it out. You have no idea how to operate Submittable. What is a litmag?

Unlike many other people in MFAland, I love political fiction, and what’s more, I think this shows in the stories I accepted to Reservoir this past issue. Greg Sullivan’s “Scary Close to the Zoo” is a prime example, with its commentary on the hot mess that was Atlanta’s 1996 Olympic Games.

But let’s be real, a lot of beginning writers set out to compose political fiction and just come up with a heavy-handed screed. It helps to have some plot in your politics, some humor to counterbalance your convictions, rounded characters for whom I feel actual empathy. Forget the easy calls, the right-wingers sending me their unaltered, uninteresting fantasies about stopping a terrorist attack. I’ve turned down plenty of staunchly leftist, feminist stories—even though staunch leftist feminism is my thing, even though I’d love to have a drink with the writers—because the work just felt didactic to me.

The state of literary publishing is such that nearly all of us who read are doing so for free, in our spare time. We have lives, busy ones. Many of us are earning graduate degrees or adjuncting or raising kids or some combination of the above.

And so far as I can tell, absolutely any magazine that has ever offered its writers money, or been written up in The Review Review, or heaven forfend, won a Pushcart, is bombarded with manuscripts on a daily basis. So not only is any given reader trying to work your manuscript around what is likely a busy, busy life, but also, a workflow has been established to deal with the sheer quantity of submissions, and that workflow means your manuscript might sit for a few weeks or months before even being assigned to a reader. And then your manuscript is the fiftieth in line to be read.

These things happen. It’s not a sign of anything except that readers are busy and unpaid. I promise you will get your turn. Please don’t email queries until it’s been several months. Please don’t pull your work out of our system in a huff.

You have asked the magazine a favor by submitting—you want the readers to check out your stuff. The staff of that magazine are now asking you a favor. They want you to check out their stuff. This is entirely fair. If you’re really upset at being reminded a given magazine exists, then why did you contact them in the first place?

Anything else you need cleared up? Ask me in the comments.