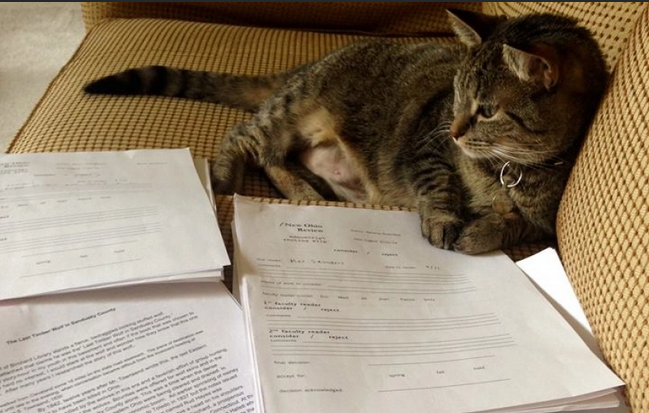 Last week, I sat at my desk, a pile of student papers before me, a cursor pulsing in the blank document that needed to become an essay draft for workshop. It was 10:00 at night. I wanted to be marathon-ing The Twilight Zone. Across the room, my cat raised her head. She was sitting in my armchair, curled up on a throw, and nestled among several pillows. I am frequently jealous of my cat’s lifestyle, but never so much as I was in that moment. In my first post, I wrote about how nighttime is usually a sacred time for me, but as the midpoint of my first semester at WVU approaches, I’ve had to make some sacrifices to ensure that I stay on top of my work. Sometimes that means giving up my nights.

I’ve lived here since the first week of August, and I’m still not sure what to make of Morgantown. I like the old people bars where I can have a cocktail in peace without worrying that I’ll see one of my students barfing violently in the bathroom. I’m thankful for the bakery across the street from my house that has terrific baguette and chocolate chip cookies. I think it’s great that there’s a place downtown where I can order fried chicken for delivery until 3 AM. But this place isn’t home yet. I’m not sure if it will ever feel like home, and that’s a lonely thing to realize. I worry that everyone in my cohort works too much, that we don’t see each other enough outside of our classes and offices. I worry that they’re all hanging out without me. I worry that I work too much, that I don’t work enough. With two years of graduate school already under my belt, I know that these feelings are just a part of the perma-student life.

My students are working on their midterms, and I’ve asked them to reflect on the work they’ve done this semester, what they have accomplished, what they still need to improve upon in the next seven weeks. I’m asking myself these same questions, especially about my writing—which is the most important thing I’m doing right now, but is so often not what I’m working on. I’ve always struggled with developing a healthy writing routine. I have friends who rise at 4 AM, drink scalding coffee, and write at least a thousand words before 7 AM. I have never been that person. By the time I remember that I’ve made coffee (usually at 10 AM), it’s at room temperature. I fidget at my desk. My apartment is never cleaner than on a week when I have an essay due for workshop. I work slowly, usually churning out 2 or 3 essays in a semester.

The workshop I’m taking now has already kicked my ass in the best way possible: we’re turning in an unprecedented (for me) 4 times and revising 2 of our essays by the end of the semester. When my professor announced this on the first day of class, I panicked, realizing that this semester was going to force me to change my lazy habits and generate more work in a short time than I’m typically used to. And then I got over that fear pretty quickly. First, because I had to. More importantly, though, because I remembered that the best writing classes I’ve taken were those that challenged me, pushing me beyond what I found comfortable and easy.

After we workshopped the first round of essays, I left the classroom feeling what I always describe to other people (who look at me like I’m off my rocker) as a tingle. It’s a sensation that begins at the crown of my head, warming my entire body. It’s the way I feel when I have the urgent, earnest desire to write. It’s a physical reaction, not something borne of obligation.

The reason I usually always give to people who ask why I wanted an MFA after an MA is the canned response: I wanted to continue to be a part of a community of writers. But, I think there’s more to it than that. I wanted to work alongside people whose work and whose support of my own writing reinforces that primal urge to write. That urge is often drowned out by uninspired student essays, by exhaustion, by the emails I haven’t responded to, and by the desire, not to write, but to marathon The Twilight Zone instead.

So in the next 7 or 8 weeks, I want to look at the mug on my desk and actually obey its command. It’s the mug just about every writer has stashed in their suitcase on the way home from AWP. It’s the mug my mom hates, but surprisingly hasn’t passive aggressively broken yet. In the next 7 or 8 weeks, I’m going to “write like a motherfucker.” I have two more essays to write, two more to revise, and I want to remember to have fun while I’m doing it. The mug is a reminder:  be tenacious, be bold, be playful. Keep at it.